…I’ve often been tempted to write a short story, one that is less than a thousand words and yet establishes characters, sets a scene, has a definable beginning, middle and end that develops along an unpredictable line, and spikes the interest of the reader right from the start. Tough to do, you say. Yes. A thousand words is around a page and a half of A4 which is not a lot to achieve all these objectives but here’s my first attempt. Comments are welcome.

The Man on the Bench
Ben Bennetts 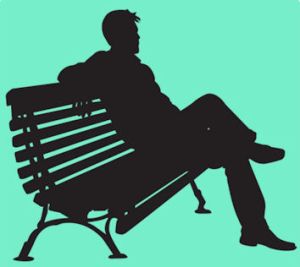 …‘Hello, Dad.’
…The man sitting alone on the park bench turned his head towards the source of the sound. Nobody had ever called him Dad. Forever a bachelor, he had never experienced the domesticity of home life immersed in the clutter, clatter and chaos of a family environment. He’d never held a small child in his arms, wiping away tears of pain or frustration; never experienced the wonder and joy while witnessing the unquestionable belief that Father Christmas was real; never felt pride as an offspring performed on stage to an audience of other mums and dads; never became angry because a child of his had not succumbed to a logically reasoned explanation as to why such behaviour was unacceptable. No, never had he become knowledgeable about events such as these. His life had been one of casual labour and travel with occasional dalliances which served more to satisfy his carnal desires than those of his one-night stand partner.
…‘Hello, Dad,’ said with slightly more volume and containing just a frisson of urgency.
…She was looking at him with a steady eye, her face slightly freckled, her brunette hair closely cropped – the pixie style, he recalled – dressed in a nondescript dark-coloured hoodie whose sleeves extended beyond her fingertips, a pair of jeans with what appeared to be designer holes around the knee areas, and sneakers festooned with logos, flashy stripes, and multi-coloured untied laces.
…But it was her eyes that held his gaze. Blue in colour, they radiated confidence and poise way beyond her age which he put at around twelve but which is always difficult to judge when adolescence is due to strike. She stood absolutely still, one hand on a hip, her head slightly tilted, a hint of a smile hovering on her lips, watching and waiting for his response.
…‘What did you call me?’ he said. ‘Dad?’
…‘Yes. You’re my dad.’
…‘I’m not following.’ He was going to add ‘young lady’ but decided that would sound patronising and even overly familiar.
…‘You’re my dad. Mum told me yesterday.’
…‘Oh yes, and who is Mum?’
…‘Alice Cartwright.’
…‘Alice Cartwright? When were you born?’
…The girl answered his question giving a precise date from which he worked out she was, indeed, twelve years old plus a few months. Silently, he sat on the bench working his way back through the wasted years until he arrived at an approximate date nine months before the girl’s birthday. Slowly, he dredged the corners of his memory cells, what was left of them, struggling to recall where he was at the time and, more importantly, who he’d met.

…Then it came to him. He had been walking a long-distance trail somewhere in the north-east of the country and had stayed the night at a remote pub out on the moors. He remembered the pub was virtually empty that evening and after a hearty meal of enormous proportions, he had spent the rest of the evening chatting to the rather plain-looking young resident barmaid who had seen to his food and found the bottle of wine he’d requested off the piece of paper masquerading as a wine list. Alice was her name and she’d sat with him, helping to finish the bottle while they swapped life histories in a matter of minutes. He had told her he was between jobs and spending his time hiking along the long-distance trails that criss-crossed the country whereas she had described her failed attempts to complete various college courses in topics to do with the countryside – animal husbandry, woodland management, ecology and conservation – that sort of thing. It turned out that her father, a local farmer, was anxious to keep his daughter involved in countryside matters and had pushed her into the courses. Her heart lay elsewhere, however. She was a natural artist and was more attracted to painting water-coloured landscapes and pencilled portraits. She’d pointed to various head-and-shoulder sketches hanging on the walls of the pub. ‘They are some of our regulars,’ she’d explained.
…‘Well, I’m not a regular,’ he’d said, ‘but would you like to sketch me?’
…‘No problem. My pad and pencils are upstairs in my room. Let’s go up there. I’ll close the pub and we can take another bottle of this excellent wine, on the house, to see us through the evening.’
…And that’s how it came to be that he had spent the night with her, sleeping in her bed after what comes naturally came naturally.

…‘Ah yes, I remember now. You are the product of a night of love with a lonely barmaid in a remote pub on the moors,’ he murmured.
…The girl nodded her agreement. ‘Yes, that’s what Mum said.’

…Just then, a matronly figure strolled across the park shouting over to the young girl.
…‘Marie, it’s time to go,’ she said. ‘The orphanage bus is about to depart. Why are you staring at an empty park bench? And who were you talking to?’
…The girl whispered goodbye, turned and walked back to the older woman.
…‘My dad,’ she replied.
…‘But there’s nobody on the bench, child. Nobody knows who your dad was. Your mother died in childbirth without saying and your grand-parents refused to take care of you. Come on; let’s get back to the bus.’

…The man on the bench watched the girl, his daughter, depart. Since his accident, from which he never recovered, he’d taken to wandering and observing but unable to participate in the world he had departed – until just now.

10 thoughts on “The Man on the Bench”