…During the March to May UK 2020 lockdown period, I was unable to take my usual regular keep-fit walk in the countryside. Ron, my next-door neighbour, suggested I walk around his very large back garden instead and one crisp March morning I entered the garden, trekking poles at the ready, took a deep breath and began to walk. No sooner had I started than I felt a slight movement on my right shoulder. Thinking it was a bird, I turned my head to see what type of bird had landed. But it wasn’t a bird; it was a garden pixie. He introduced himself as Pesky and proceeded to accompany me on the walk, describing what I thought were typical mundane features in the garden but which were, in fact, magical places.
…Subsequently, I walked around the garden many times during lockdown. Pesky always came with me and, along with his pixie friend, Tanya, told me many things about the garden including their adventures in a place called Rainbow World that could only be entered through an archway in the garden ‘at 2 o’clock in the morning when the moon is full.’
…Throughout the period while all this was happening, I was making notes of everything the two pixies had told me. Victoria, my neighbour’s 6-year-old daughter, became my muse and, eventually, I put it all together in a book called Victoria’s Magical Garden. But, more recently, I realised I had never had to ask either Pesky or Tanya to repeat any of the amazing stories they told me: never a ‘What did you say?’ or ‘Pardon?’ or even a simple ‘Eh?’ I wear hearing aids, one behind each ear and, like most hearing-impaired people, I occasionally ask for a repeat. But not with Pesky or Tanya. I asked myself why?

…This question bothered me and last week I went down into Victoria’s magical garden and sought out the two pixies. They spotted me and came running and leaping across the lawn, shouting with glee. We hadn’t met since May so there was much catching up to do but, finally, I got round to my questions – why could I hear them perfectly and do pixies ever have to wear hearing aids?
…They asked me to explain about loss of hearing. I talked about auditory canals and nerves, eardrums, cochlears, hammers, anvils, stirrups, and many other things about how the ear works and why, sometimes, some of the bits and pieces don’t work as well as they used to which means we humans have to wear artificial aids. I took one of my aids out of my ear and showed them what it does. They were fascinated by it, turning it over and over, studying the aid, talking into the ear mould as if it was a microphone, and laughing when it whistled at them.
…All the time I was explaining, Pesky and Tanya were attentive but didn’t interrupt. When I finished by asking my two questions, it was Tanya who spoke first.
…‘Mr Ben,’ she said (she always called me Mr Ben), ‘I think I know why you heard us perfectly and why we don’t need hearing aids.’
…She paused and looked at Pesky.
…‘Shall I tell him?’ she asked Pesky. ‘It’s a pixie secret, known only by a few humans.’
…‘Yes, I think it’s okay for Mr Ben to know. Go ahead, Tanya,’ he said.
…Tanya turned back to me and spoke. ‘It’s because we communicate telepathically,’ she said. ‘When we speak, we speak inside our heads and the words transmit by magic to inside your head and you hear everything we said perfectly. When you speak, we receive the sound through our ears and hear you perfectly. Because we only use our ears when we speak with humans, they never wear out ‘cos we don’t meet many humans. Hence, we don’t ever need hearing aids.’
…Well, I can tell you, I was blown away by this revelation and Pesky and Tanya agreed I could tell the world about the telepathic ability of pixies. 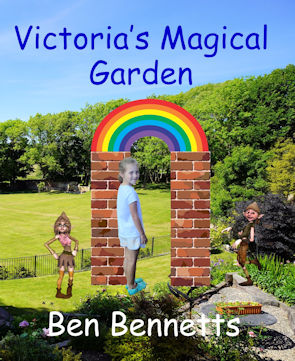 Victoria’s Magical Garden, Ben Bennetts, published by Atheos Books in 2020 is available on amazon.co.uk, priced £12. For other books by Ben Bennetts, visit https://ben-bennetts.com/books/