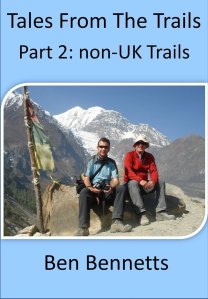 Announcing another new book, the second this year!  Here’s a summary.

Walking is good for you. It provides physical exercise and stimulates the senses. It gets you out and about. You see places that can only be reached on foot. It also has its moments, sometimes funny sometimes dangerous, plus mishaps and other adventures. This series of books is a collection of observations, stories, advice and photographs from the long-distance walks I’ve made, with my wife Carol, after retiring in 2007.

I finished writing this book in 2014 but delayed publication until we had completed another long-distance path in Spain, the 486-mile Camino de Santiago. In November 2014, we signed up to do this very famous trail over a 7-week period in May/June 2015 but unfortunately my left knee collapsed on me just before we were due to travel to Saint-Jean-Pied-de-Port in southern France, the start point for the walk. I had had trouble with worn-away cartilage in this knee and in 2013 I had a Durolane injection to replace the cartilage. At the time, the knee surgeon said that the Durolane would not last forever and, sure enough, he was right. The synthetic cartilage material finally dispersed about two weeks before the Camino de Santiago walk and we had to cancel the walk. I had a total left knee replacement operation in June 2015. I’m now in post-op recovery (July 2015).

I am hopeful that with the right post-op recovery program, I will be donning the walking boots and striding the trails again, maybe as early as 2016, so it’s watch this space.  In the meantime, enjoy Part 2 of the series.  Further details including price and availability can be found here.

I’m missing the walking but watching a lot of videos and thinking about my next book.

2 thoughts on “New Book: Tales from the Trails Part 2 published”