Looking at the news on the BBC website this morning (20 February 2021), I suggest you forget about:

… the bear that either bit or clawed Shannon Stevens’ behind when she sat down to use a toilet situated in a remote outhouse at Chilkat Lake, Alaska;

… the impending divorce between Kim Kardashian and Kanye West and especially the impact on their four children already burdened with the forenames Psalm, Chicago, Saint and North;

… Harry and Meghan’s disappointment, and anger, over losing all their royal honorary and military titles especially now that a second H&M child is on the way;

… the effect on horse racing in the UK of Princess Latifa’s alleged imprisonment by her father, Sheikh Mohammed bin Rashid Al Maktoum, ruler of Dubai;

… the ongoing war between Facebook and the Australian news publishers and government;

… the spat between Nicola Sturgeon and Alex Salmond;

… whether Donald Trump will make a political comeback; and

… how long the Duke of Edinburgh will remain in hospital.

Think instead of the engineering marvel that is called Perseverance, the rover that has just been parachuted down into the Jezero crater on the surface of Mars. I have to say that what the engineers, scientists, mathematicians and all the support staff at NASA have done is an incredible achievement. Perseverance started its journey aboard an Atlas V spacecraft on 30 July 2020 and, almost seven months later, was safely placed in the Martian crater on 18 February 2021 after travelling 470 million kilometres/292 million miles and protected by heat shields from temperatures as high as 2,100°C (3,800°F) as the spacecraft entered the Martian atmosphere. The 3m (10foot) long rover weighing 1,025kg (2,260lbs) now has the task of hunting for signs of past life (known as biosignatures) on Mars as well as conducting a host of scientific analyses of the atmosphere and whether there are or have been any signs of water in the crater. 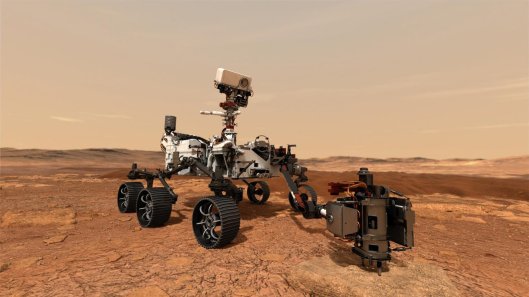 Ingenuity, a 1.84kg (4lb) helicopter, currently residing in Perseverance’s joey pouch, will soon attempt to take to the thin 95% carbon dioxide Martian atmosphere and conduct arial surveys of the crater if it can generate enough lift to rise above the surface.

Perseverance, with its smaller Ingenuity companion, is a remarkable feat of engineering and completely dwarfs most of the other headlines on today’s BBC website. We may all be fed up with the demoralising effects and personal impact of the Covid-19 pandemic but put these feelings aside, if only briefly, and think about what NASA has achieved. I take my hat off to those who made Perseverance happen.

4 thoughts on “In the News: Forget about… Marvel at…”