When I go to my local barber’s shop, I enter the room and sit down in the nearest available chair to wait my turn (but see later for more on chair selection etiquette). There is no form or structure to the way the chairs are arranged in the waiting area. There are about 25 chairs positioned around three edges of the room. The fourth edge opens up into the area where the hair cutters perform their duties, plus there’s a table whereupon sits a pile of neatly-stacked magazines, nowadays Yachting International, Tech Radar and National Geographic Magazine. Nobody reads these magazines. When the table contained FHM, Nuts and other lads’ mags, the table was usually bare (like the images of the girls in the magazines) because the magazines were in furious page-flicking use. 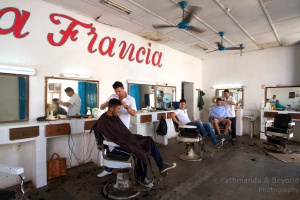 When I walk in, the first thing I do is note how many men are already seated awaiting their turn. What I know instantly is that I am next after all these men have been serviced but what I don’t know is who I follow. If there is only one or two men waiting, it’s not a problem but if there are, say, eight or nine men waiting, I’ve no idea who I will be following because the men are seated randomly around the edges of the room. When they entered they followed the universal Men’s Urinal Law – that is, they seated themselves as far away from all other men as possible. (Men automatically position themselves in this way when they enter a public urinal. They seek to maximise the left and right buffer zones. If you don’t believe me, take a chair and a good book and sit down inside a men’s urinal and observe the behaviour of those who enter, or browse to http://www.brocode.org/a-quick-guide-to-urinal-etiquette/ for a succinct and humorous summary of urinal etiquette.)

Back to the barber’s …

Okay, once you’ve entered the barber’s waiting area and counted the number of men in front of you, you take your seat and wait. The average time taken to cut a man’s hair – straight back and sides and a little off the top, nothing fancy – by the hair dressers in my local barber’s is 20 minutes. If there are, say, three barbers on duty and, say, eight men ahead of you, it stands to reason that even as the number ahead of you starts to decrease, there is adequate time for other men to enter the barber’s to take their turn. Now, the problem of where are you in the queue worsens. Because of the random seating, you’ve now lost the knowledge of who was in the room when you first entered and who has entered since. The problem is made even worse, if that is possible, by the fact that you, and everyone else in the waiting area, is an old man dressed in drab nondescript clothes with no salient characteristic that aids memory and recognition other than degrees of baldness and shades of grey. For example, I would never go to my barber on a Saturday morning, nor before 9 AM or after 4 PM on a week day. The place would be full of young people asking for spikey hair dos or brylcreem-slicked Don Draper styling that take far more than the statutory 20 minutes. Oh no, I am older and wiser and choose my time carefully. So do all the other old men in a 10-mile radius around my barber’s and thus the room is full of older-and-wiser old men and we all look the same!

What to do? I have no simple answer other than to operate a ticket system like at the deli counter of my local supermarket, or set up an appointment system, or have the barber come to your home, or … But, I’ve never come across a barber’s shop that offers any of these solutions. What I know however is that everyone in the waiting area has the same problem – who’s next and when is it my turn? Thus, every time one of the hair cutters completes a shearing, whips off the cape, takes the payment, and then turns to the group with the well-known question ‘Who’s next?’, everyone in the waiting area panics and scans the room to see who will take the initiative. There is an opportunity here for the queue jumper to push ahead or for the meek to lose his turn and maybe this happens but most of us are polite and want to do the right thing. The problem is, we don’t know what the right thing is!

‘Tis a problem I never had when I was younger but which now sends me into an almost panic attack. I can’t wait for the day when I go bald thus removing the problem permanently.

2 thoughts on “Dilemma at the men’s barber’s shop”