My son Mark and his wife Kirsty are nomads.  They travel the world, photographing, exploring and recording their findings on a blog website.  Recently, they returned to Bulgaria and visited an abandoned communist building built on a hill called Buzludzha located in Central Bulgaria.  The building resembles an Unidentified Flying Object and was built by the Bulgarian Communist Party in 1981 but subsequently abandoned when the 1989 breakup of the Soviet Union took place and Bulgaria reclaimed its national sovereignty.  Since then, the UFO-like construction has been left to decay and is not even listed as a tourist attraction by the Bulgarian Tourist Board. 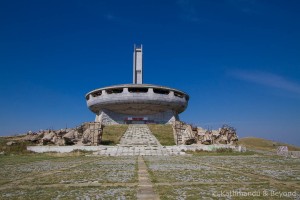 Nevertheless, Mark and Kirsty made the visit and duly posted an interesting blog about what they found.  You can read it here.

I read an early draft of the blog.  In it, Kirsty mentioned that in the initial years following abandonment it was possible to squeeze through small openings and take a look inside the building but the openings have now been blocked off.  The building is no longer safe to enter and she mentioned that two French tourists had died there a few years back.  I queried how they had died.  Were they killed by falling debris, or by renegade Bulgarian ex-communists, or by drinking too much of a local Bulgarian brew called mastika?  It was an idle question but it prompted Kirsty to dig deeper and she added the following comment in the final version of the blog:

*** UPDATE*** We’d read accounts of the deaths – cited as murder – of two French tourists at Buzludzha and even seen photos of the small shrine to them, in the bowels of the UFO. However when we delved further, we couldn’t find any news articles to corroborate the stories. Eventually we found a post on the site Abandoned Berlin which concludes it is some kind of elaborate hoax! The fact this was confirmed to the author by Ivan at the IT Shipka Hotel is sufficient evidence for us to believe this version of events. Annoyingly, we didn’t think to ask Ivan ourselves during our stay. It seems the mysterious ‘deaths’ have turned into something of an urban myth!

Now my curiosity was truly piqued.  I took a look at the Abandoned Berlin website and found the blogger’s comment on the so-called murders:

I found myself in some sort of computer room and there I found a shrine to two French urbexers (urban explorers –editor) murdered here on October 5, 2012. 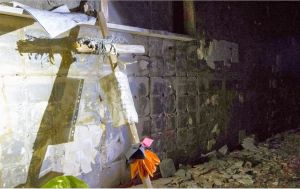 There was a crude wooden cross resting against the wall, holding a note remembering Achille Pinet, 23, and Marrok Brideau, 29 and their murder date. A former bunch of flowers decayed beside it, along with something in gift-paper. On a shelf above – a bible, the remains of a candle and a book of condolences, signed by the occasional visitor, mostly from English-speaking countries.

It’s a hoax – no French fellas were murdered here, though I needed to check with Ivan back at the hotel to be sure. It was the first he’d heard of it, and you can be sure in a quiet rural village in Bulgaria that everyone knows everything going on, never mind the murders.

(I looked up the names when I got home; found it was all part of a book called MEAT – Memoirs of a Psychopath. The names and date were the same.)

Okay, so far, so good but I decided to follow up on the MEAT – Memoirs of a Psychopath e-book.  I discovered it to be a free download on Smashwords, the same website I use to publish my e-books, and thus I downloaded it and set about reading it.  The author was cited as Dr Cerys Davies and the book is horrific reading.  It tells the story of a transsexual psychopath, Gabriel 13, who sexually tortures and then murders women, and men.  If you have read Bret Easton Ellis’s American Psycho or Jerzy Kosinski’s The Painted Bird or seen movies such as Henry, Portrait of a Serial Killer (1986, John McNaughton, director) or Man Bites Dog 1992, multiple directors), then MEAT is more of the same only worse.  It’s not an easy book to read and to be honest I would have given up if I wasn’t seeking the origin of the story about the murders at Buzludzha so I persisted and found… nothing.  There was no mention of anyone called Achille Pinet or Marrok Brideau, no mention of Buzludzha, and only a passing reference to Bulgaria in a chapter dealing with sex-trafficked girls in Manchester who came from Bulgaria.

Hmm.  What is the truth I asked myself?  Digging even deeper, it turns out that Dr Cerys Davies is one of the many pseudonyms of an English song-writer and folk singer called Jonathan Taylor (known as Odd Taylor) and that MEAT… is a part of a larger book called The Gabrielites: Meat: Memoirs of A Psychopath. THE Definitive Edition 2016 and, guess what, Jonathan Taylor now lives in Central Bulgaria (close to Shipka) and the Buzludzha  monument features on both the front cover for this larger book and on the cover of one of his music albums called War Hoarse.

So, what’s the truth?  Do the murdered two Frenchmen appear as fictional characters in the larger version of MEAT?  I am reluctant to read any more in the MEAT series to find out.  Has Jonathan Taylor fabricated the story in order to boost the circulation of his books, and music?  Or is the story true and Jonathan Taylor is cashing in on it?  And who built the shrine inside the monument: Jonathan Taylor to add substance to his myth?  And why is the In Memory note written in English rather than French? 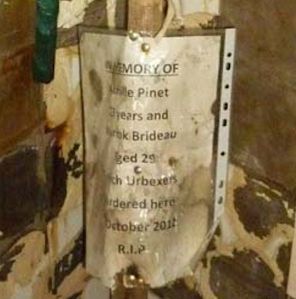 The truth is out there and I’ve urged Mark and Kirsty to return to Shipka in order to talk more with Ivan at the IT Shipka Hotel and if possible to track down Jonathan Taylor to hear the definitive answers to all my questions.  I am also trying to contact Jonathan Taylor.  I will let you know if I am successful.

And how the hell do you pronounce Buzludzha?  Buzz-lud-jar?

9 thoughts on “Murders at Buzludzha: Fact or Fiction?”