Anadin, Brexit, Hard Brexit, No deal is better than a bad deal, Nothing acts faster than Anadin, Theresa May

Yesterday, in a much-anticipated speech, Theresa May laid out her terms for leaving the European Union stating that her plan is to exit the Common Market and the Customs Union, regain full control of the UK ‘s borders and immigration policies, and sever our subservience to the European Courts: in other words, a hard Brexit.  Be that as it may (no pun intended).   What interested me was her warning to the EU negotiators—”No deal is better than a bad deal.”  What did she mean?   That “no deal” i.e. a walk-away from the negotiation table, is better than a bad deal?  Or that there is no deal better than a bad deal therefore she’ll accept a bad deal?   Her phrase is ambiguous although I assume, and hope, she meant she’ll walk away from a bad deal rather than accept it. 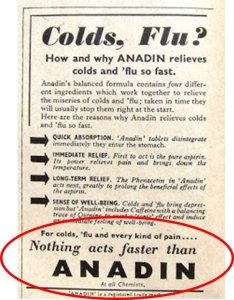 Her statement reminded me of the now infamous 1955 advertising slogan for the painkiller Anadin—”Nothing acts faster than Anadin”—as a result of which many people decided to take nothing rather than buy Anadin.  Nothing was both cheaper and faster.

What the company should have said is “Try our pain killers; you won’t get better!”