Donald Trump’s 27th January 2017 executive order titled “Protecting the Nation From Foreign Terrorist Entry Into the United States” is currently attracting much discussion in the media.  The exact wording of the 2,884-word order is long and tortuous and, incidentally, does not list the seven countries censured: Iraq, Syria, Iran, Libya, Somalia, Sudan, and Yemen.  Where did this list come from?  Section 2(c) of the executive order states:

Okay, let’s take a look at section 217(a)(12) of the INA, 8 U.S.C. 1187(a)(12) document.  INA, incidentally, stands for Immigration and Nationality Act and INA 1187 lays out the visa waiver program for alien visitors to the United States.  It includes a list of countries deemed to be a threat to the United States and, right now, specifies the seven countries listed above.  So, this is the origin of the list but note this: nowhere in Trump’s executive order or in INA 1187 is the classification “Muslim” mentioned and yet the BBC now always qualifies the seven countries as “mainly Muslim” in its reporting of the executive order and its aftermath.  The New York Times uses the term “Muslim majority”.  Why?  Why are these seven countries characterised as “mainly Muslim” or “Muslim majority”?   What does the characterisation mean and what is the intent in so characterising?

Let us look first at the use of the term to characterise the seven countries.  Islam, as a religion, is just like any other major religion.  It’s full of schisms.  We hear of, and may know the difference between Sunni and Shia Muslims and we may have heard of Wahhabi and Sufi Muslims but, get this: according to one source, there are over 150 different sects of Islam.  One hundred and fifty!  Where are they?  What are their beliefs?  How many are breeding grounds for terrorists? And, more importantly, how many terrorist-breeding sects survive and thrive in the seven “mainly Muslim” countries affected by Trump’s executive order?  For me, the epithet “mainly Muslim” (a religious epithet) means nothing.  The media could equally well have described the seven countries as “mainly Arab” (an ethnic epithet) or “mainly Middle East” (a geographic epithet) or “mainly sub-tropical” (a climatic epithet).  In addition, Islam in its many forms (Wikipedia lists four major sects, not 150, but with many sub-divisions within each sect) does not exist just in the seven countries listed.  The religion is all over the world with high concentrations in, for example, Indonesia, Ethiopia, Nigeria, Pakistan, India, and Bangladesh.  Why are these countries not considered a threat to the United States?  They are all “mainly Muslim”.

What is the intent of the “mainly Muslim” labelling of these seven countries? Clearly, there has been a policy discussion within the BBC.  All the reporters, news readers and political correspondents use the term, without fail.  It’s a BBC directive, similar to the use of “so-called” to describe Islamic State.    Is the use of “mainly Muslim” driven by Islamophobia?  Or by a desire to subliminally keep linking Islam to terrorism?   Or to ratchet up our awareness of the religion as a force of evil?  Or what?  We can but speculate.  In the meantime, I’ll keep on muttering “whatever that means” every time I hear the phrase “mainly Muslim” used to describe the seven countries affected by Trump’s executive order. 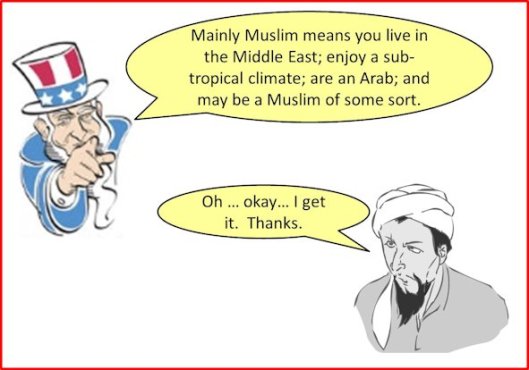