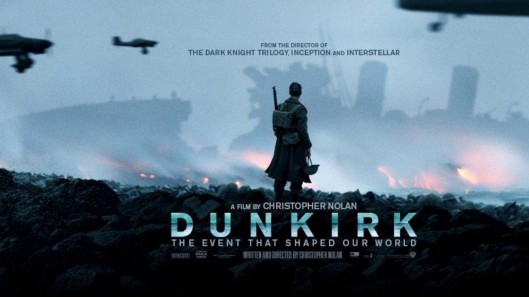 I watched Director Christopher Nolan’s 2017 Dunkirk movie this afternoon.  Good, but not great, in my opinion.  The one-hour in the air/one-day at sea/one-week on the land interspersed time-zone structure of the movie didn’t work for me.  Maybe I like my storytelling sequential and linear without time jumps, rather than in three different time zones?   (I had the same trouble with Nolan’s 2000 movie, Memento.  The backwards-in-time sequences drove me nuts!)  I understand the problem Nolan had but, for me, the film would have worked better if he had depicted the one-hour Spitfire sequence embedded within the one-day small boat sequence with both storylines taking place within the latter part of the one-week rescue-at-sea sequence.

Apart from that, the film was a somewhat conventional war evacuation movie with, as it turned out, virtually no major battle scenes.  The minimal dialogue required by Nolan (he wrote the script and wanted the visual imagery to tell the story) meant that there was almost no character development.  Tom Hardy was just a masked face sitting in a Spitfire’s cockpit shooting down Me109 fighters and Heinkel bombers.  Mark Rylance steered his small boat all the time and occasionally glanced back over his shoulder to say something patriotic to his son, or to reprimand the  “shivering soldier” (Cillian Murphy in a very non-role).  Kenneth Branagh reminded me of Jack Hawkins (Angels One Five, The Cruel Sea, Bridge on the River Kwai, and a million other movies where Hawkins played a very British stiff-upper-lip military man of high integrity and commanding presence).  And, the so-called star of the movie, Fionn Whitehead, didn’t strike me as an up-and-coming actor to watch.  He did what he was asked to do but in retrospect, I cannot recall one memorable scene where he showed any outstanding skills as an actor.  Harry Styles (One Direction pop boy band) similarly.  Shorn of his famous tumbling girly locks, his role required mostly face grimaces and a bit of eye rolling.

So, there you have it.  I was not impressed and the film came across as a bit of indulgence on Nolan’s part, a vanity project, something for the critics to drool over if they wish.  But, not this critic!