I’ve been following the ongoing row in the Labour Party about anti-Semitism.  It seems that several members of the party have expressed remarks deemed to be anti-Semitic, and subsequently have been castigated for their remarks:

Just before she was elected as MP for Bradford West in 2016, Naz Shah shared an image of the outline of Israel superimposed on an outline of the United States and overwritten with the words, “Solution for the Israel-Palestine conflict – relocate Israel into the United States”.  Shah added her own “Problem solved…” comment.  Subsequently, Shah was advised to resign from her parliamentary private secretary post and was temporarily suspended from the party.

Ken Livingstone, the then Mayor of London, defended Shah’s actions and added, “When Hitler won his election in 1932 his policy then was that Jews should be moved to Israel. He was supporting Zionism before he went mad and ended up killing six million Jews.”  Livingstone was also suspended from the Labour Party, and remains so, despite saying that he was only quoting historical facts and adding that, yes, Hitler was a monster.

Freedom for Humanity, Mear One, graffiti artist, 2012
©2012, mear one, http://mearone.com/,permission to use granted)

Several other allegedly anti-Semitic incidents have been reported since 2016, culminating in the latest accusation against Jeremy Corbyn, Leader of the Labour Party.  In 2012, a Los Angeles graffiti artist known as Mear One painted a mural named Freedom for Humanity on a wall in Brick Lane in Tower Hamlets, London.  The mural depicted a group of elderly businessmen, possibly bankers, sitting around a board game that resembles the property-development game of Monopoly, resting on the backs of seemingly naked darker-skinned males.  The message is clear – rich white people have built their wealth on the backs of poor slave labour.  The mayor of Tower Hamlets said, “The images of the bankers perpetuate anti-Semitic propaganda about conspiratorial Jewish domination of financial and political institutions,” and ordered the mural to be buffed off the wall, which it was.  Mear One denied the accusation of anti-Semitism and, in 2012, posted messages on social media complaining about the order.  Corbyn reacted at the time in a way that appeared to be supportive of Mear One’s rebuttal and of the mural’s content and, as a result, six years later, Corbyn has been tarred with the same anti-Semitic brush.  Corbyn has since retracted his response but the row rumbles on.

What concerns me about all this, apart from the, “What happened to freedom of speech?” is that the lines are being blurred.  Anti-Semitism is defined to be hostility or prejudice against the Jews (Oxford Dictionary) where a Jew is further defined to be a member of the people whose traditional religion is Judaism and who trace their origins to the ancient Hebrew people of Israel.  Does this definition of anti-Semitism automatically translate into hostility or prejudice against Israelis?  If you think about Naz Shah’s supposed anti-Semitic comment, it was not about Judaism.  It was about Israel and the Israeli government’s policies towards the Palestinians.  Much has been written about the Israeli treatment of Palestinians, including my own analysis in The Religion Business: Cashing in on God, and there are clear links between Judaism, the Jewish religion, and the foreign policies of the Jewish government but are we to consider all criticism of Israeli policy to be anti-Semitic?  If so, we should stop using the term anti-Semitic and, instead, say anti-Israel.

There’s also the question of how many people who live in Israel are actually Jews – that is, true believers and followers of Judaism?  This is a tough question to answer.  Wikipedia estimates the world population of Jews as being 14.4 million in 2016, 6.6 million of whom live in Israel, and around a further 6 million live in the United States.  Of those who live in Israel, how many are practising Jews and how many are what I call convenient Jews – people who profess to follow the Jewish faith but, in reality, just conform because it’s easier or more convenient to do so within a Jewish state?  Israel is a Jewish state, hence all citizens are Jews.  England, my home country, is a Christian state but not all citizens are Christians.  I’m not, for example.

My point is, being a Jew is not necessarily being a member of a religious faith and so-called anti-Semitism is not necessarily aimed at all Jews.  The lines are now blurred.  I would postulate that Naz Shah has no objection to Judaism or if she does, she keeps it to herself.  Her comment was aimed at the Israeli subjugation of Palestinians, a government policy.  Similarly, Mear One’s mural was not a comment on Judaism.  None of the “bankers” appear to be wearing a yarmulke.  The mural is more a comment on how the world’s wealth has evolved via exploitation of one group of people by another.  That’s undeniable.  Corbyn’s support of the mural is similarly based on socialist principles and ideals; not on religious sentiments.

I worry about the loose way we use terms like anti-Semitic to tar those who speak their mind about Israel.  We don’t condemn those who speak out about the Russian annexation of Crimea four years ago, or current Russian support of East Ukrainian separatists, for example.  Boris Johnson’s opinion piece on the annexation of Crimea is not condemned as anti-Soviet, nor has he been asked to resign his position as Foreign Secretary.

I accept that the meanings of words change as time progresses but let’s stop the knee-jerk reactions to anything that appears to be anti-Semitic, anti-religion, or racist, and analyse the true intent behind the comments and protect the right for people to say them. 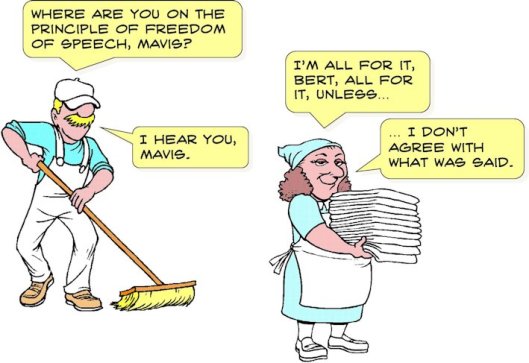