I’ve lapsed a bit recently in writing blogs, not because there’s nothing to write about but because I’ve replaced my ageing Sony Vaio laptop with a brand new shiny all-singing all-dancing HP Envy 13.3” laptop, oozing with beautifulness, seductive in its silkiness, and fast – man, I can’t begin to describe how fast it is.  Think Juan Manuel Fangio if you are of my generation. Or think Usain Bolt if younger.  Setting up the Envy was a dream (the instructions said, “Make sure the AC adapter is plugged in and connected to the laptop and then switch the laptop on” – that’s all) and I’ve been engrossed in installing and exploring new apps and transferring folders and files from the old whizzy-whizzy hard drive on the Vaio to the oh-so-silent oh-so-fast solid-state memory in the Envy.  It’s a beauty, I tell you, but it’s time to stop drooling and get back to serious writing.  There are items in the news that compel me to put fingers on the light-to-the-touch responsive keyboard so here goes. 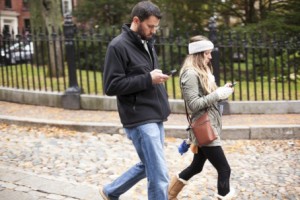 First up, smartphone zombies, or smombies as they are now known. Last July (2018), in a blog about smartphone addiction, I expressed my concern about those smartphone users who walk in public places, such as the High Street, staring down at their screen rather than paying attention to where they are walking thus creating opportunities for smombie-to-smombie collisions or smombie-to-elderly-non-smombie wipeouts.  In parts of China, walking in this manner has become an offence.  A woman in Wenzhou has been fined 10 yuan (£1.10/$1.48/€1.30) for using her phone while crossing a busy road.  Not a lot, but it’s a start in the fightback against High Street smombie assassins.

Sheltering from the rain
Pennine Way, May 2013

A few years back, my wife and I walked the UK National Trail called The Pennine Way.  It’s a gruelling 268-miles up-down up-down hike along the spine of England, starting in Edale in the Derbyshire Peak District and finishing at Kirk Yetholm just over the border in Scotland. We hiked it in two separate multi-day walks over eighteen walking days total, averaging 15 miles/day – well, that was the plan but we abandoned the last two days of the second hike when we reached Bryness, 27 miles off the Kirk Yetholm end.  The weather was atrocious, we were tired and that last 27 miles from Bryness over the Cheviot Hills is considered hard work, even by dedicated walkers.

Imagine my surprise, therefore, when I read about Jasmin Paris, a 35-year-old Midlothian nursing mother who ran, yes, ran the whole Pennine Way in a race known as the Montane Spine Race in a record 83 hours and 12 minutes.  Ms Paris ran in the dark as well as during the day, carried all her own supplies, had no support team, slept only three hours during the run and, to cap it all, had to express breast milk occasionally.  Her baby is just over 1-year-old and, at the time of the run, was being breastfed.

Jasmin, I take my hat and my walking boots off to you!

What is it about the diminutive John Bercow, Speaker of the House of Commons?  Why is he so disliked?  Is it his smug appearance; his 1.68 metre (5’ 6”) little-man-syndrome-inducing height; his obvious leanings towards the Opposition when his position as Speaker demands impartiality; or his connection with his attention-seeking wife, Sally, who famously posed for a photograph in 2011 clad only in a bed sheet and with the House of Commons in the background? (Whatever happened to Sally Bercow and did she really put a bumper sticker on her husband’s car that read “Bollocks to Brexit” last year?)  I’ve never met the man: he might be charming, lovable and very cuddly but in my circle of friends and acquaintances he arouses instant and instinctive feelings of dislike whenever his name is mentioned in conversation or he appears on television.

The reason I ask these questions is that he may be denied a peerage when he resigns his Speaker position later this year.  The tradition of awarding a peerage to a retiring Speaker dates back to 1782 and if Bercow is denied the award it will be the first time such a denial has taken place.  Apparently, Bercow’s lack of impartiality, particularly over the recent Brexit discussions, has angered many senior members of the House, so much so that it has been suggested that he may not become a Lord.  John Bercow’s reaction to this suggestion is not known but I can imagine that Sally Bercow had a few sharp words to say to her husband over the cornflakes and orange juice at breakfast the morning after the day the rumours started flying.  Mind you, if Bercow is denied his baronetcy, we won’t get to see the photographs of Baroness Bercow posing in a mink-lined barely-there leather bikini outside the House of Lords, will we?

We are a nation of pet lovers.  Many of us have either a cuddly cat or a faithful dog, or something more exotic such as a colourful chameleon or slinky python.  But who would have a crocodile as a pet?  You can’t take a crocodile for a walk, or cuddle up with it in front of a fire, or teach it cute tricks.  In fact, you can’t do anything with a crocodile except make sure it is well secured behind iron bars and kept well fed with supermarket frozen chickens and the occasional freshly-caught rabbit.

Imagine my surprise, therefore, when I read about an Indonesian female scientist, Deasy Tuwo, who, while feeding a 4.4 metre (14’ 5”) pet crocodile named Merry, fell into the enclosure and was killed and partially consumed by the crocodile.  Unfortunately, there were no witnesses to the accident; just uneaten body parts floating in the water the following morning. This is nothing to joke about but I do wonder about the sanity of those who keep crocodiles as pets.  You’re better off with an exotic axolotl called Archie, or a budgerigar called Joey who can say “Who’s a pretty boy?”

Huawei is going down the pan, fast!  Late last year, I wrote about the backlash against the Chinese telecommunications company, Huawei Technologies, and my role in the design of its products.  I mentioned that several countries – USA, Australia, New Zealand – have banned the purchase of Huawei’s 5G communication products for fear of backdoor spyholes and hidden knockout switches, and that Canada and the UK are considering a similar ban.  Well, the list of say-no-to-Huawei countries is growing: Germany is now considering a ban.

To my ex-colleagues in Huawei, I am truly sorry to have contributed to your demise!

Apparently, the Queen is a big fan of the early-evening BBC general-knowledge quiz show known as Pointless.  (So is my wife, incidentally.)  The UK Daily Express national newspaper published this picture on their front page recently: 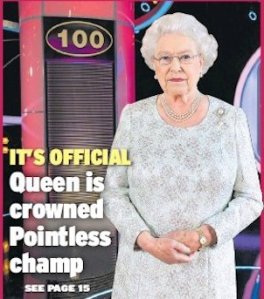 I’m sorry, but I’m an anti-Royalist and I couldn’t help but notice that the caption was amenable to a slight amendment.  I had a Photoshop moment:

I’d also like to point out that, in no way, am I suggesting my wife is also pointless. She’s not!

I see also that the Queen has urged people to find “common ground” and to respect “different points of view” in an apparent reference to the parliamentary paralysis over Brexit.

Important people such as Philip Hammond (Chancellor of the Exchequer), Matt Hancock (Secretary of State for Health and Social Care), and Amber Rudd (Secretary of State for Work and Pensions of the United Kingdom) are falling over themselves to praise the Queen’s obvious reference to the Brexit impasse but without using the word Brexit.  They classify her words as “wise” and “full of wisdom”.  What nonsense!  Pointless words from a pointless person, more like.

Mind you, if Bercow were to sing the praises of the Queen’s bland comments, he might secure his peerage.

I couldn’t resist this one!  Apparently, there is a whole microcosm of good bacteria in our gut.  It’s called a microbiome and the bacteria in the microcosmic community perform many healthy biological functions such as assisting in the creation of nutrients, programming the immune system, and preventing colonisation by bad bacteria and viruses.  No two microbiomes are the same and some of us have better microbiomes than others.  There is now a belief that these good bacteria within the body’s solid waste products (the BBC uses the euphemism poo) of certain people, vegans especially, can be transferred into the bowels of people who do not have a healthy microbiome by a process known as faecal transplant.  The bacteria are used, for example, to combat obesity.  (I’m not making this up!)  As a result, poo donors are being sought, especially those with superpoo.  Super-stool donors are being sought to become regular poo donors although it’s not yet clear how you find out if your poo is super.  The mind truly boggles and creativity runs riot:

Sounds like a load of crap to me!  Only kidding; it’s a genuine line of research.  If you have a strong gut with a good microbiome, check out the video on this website.  Note the warning: Contains scenes that some viewers might find disturbing.  I bet!

Did I mention my new HP 13 Envy laptop?  16 GB RAM, 512 GB SSD, Intel 8th generation Core-i7 processor, 1.3 kg weight but, most importantly for me, Bang and Olufsen quad speakers.  What’s not to love about this superb machine?  I’ve started taking it to bed with me every night!