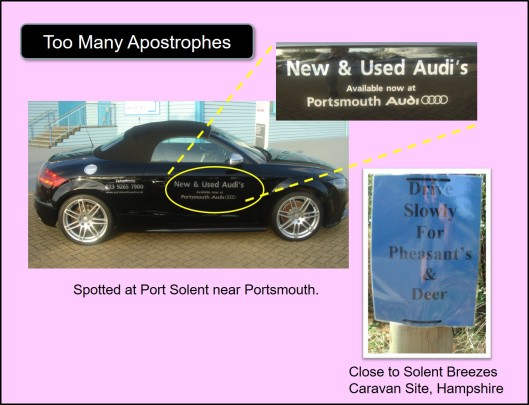 Like most writers, I take care about the use and abuse of apostrophes.  I took pains to understand their dual use of possession (property and time) and contraction – “Ben’s crazy books” versus “Ben’s crazy.” I thought deeply about possession associated with a singular noun that naturally ended in s – “James’ pen” or “James’s pen” (both forms are considered correct; it depends how you say it – Jamesiz pen or James pen). I took pleasure in Lynne Truss’s 2003 book (or should that be Lynne Truss’ 2003 book?), Eats, Shoots & Leaves in which she discusses the role of punctuation, including the apostrophe, in writing.  And, around 2009, I joined John Richards’ Apostrophe Protection Society, a website created to preserve and promote the correct use of the apostrophe.  I contributed often to the APS forum, rising to the giddy height of Senior Member with 229 entries to my credit including my controversial comments about the correct way to spell King’s Somborne Working Men’s Club, an establishment I happened to pass one day while on walkabout and whose notice board announced it to be Kings Somborne Working Mens Club.  This got me into discussion about the name of the village (Kings Somborne or King’s Somborne?) and whether Mens should be spelt Men’s or Mens’.  Oh, what fun we had on that one. 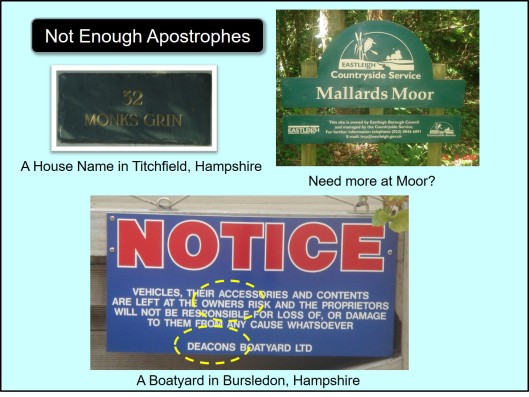 Eventually, I stopped contributing to the APS forum, partly because the same questions kept popping up and partly because other activities claimed my attention, but I never stopped looking for errant apostrophes, misplaced or missing, and I still spot them on websites such as the BBC’s or on other reputable sources of news or information.  It is with immense dismay therefore that I read that John Richards has admitted defeat in his campaign to uphold the correct use of the apostrophe. He has decided to close the APS website and cease all promotion of correct use.  “We, and our many supporters worldwide, have done our best but the ignorance and laziness present in modern times have won,” he said. “It seems that fewer organisations and individuals care about the correct use.  Those who do will get it right but those who can’t be bothered will just carry on sprinkling (the apostrophe) about where they feel it looks nice,” he added.  Apparently, the APS website will stay open for a while “for reference and interest” although, right now, it’s in maintenance mode. 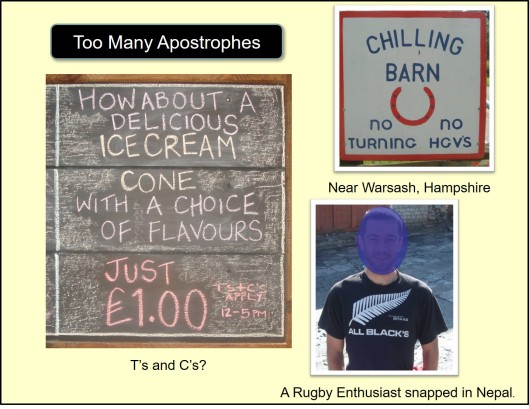 What does this announcement mean?  Does it mean we will continue to see the occasional and incorrect “T’s and C’s apply” along the bottom of our television screen during certain advertisements?  Will “New and Used Audi’s” still be available in a garage close to my home?  Will drivers carry on taking appropriate care when they encounter the “Drive slowly for Pheasant’s and Deer” sign while motoring along a country road?  How about those signs that read “Cars parked at owners risk” and “No HGV’s beyond this point”?  (I’ve seen all these apostrophe catastrophes, and more.)  You can argue that although the grammar is wrong, the meaning is clear. I agree, but that’s not the point.  The point is that if the correct use of the apostrophe is not deemed worthy of study, it can lead to the Farmer’s Market (one farmer and his produce) or Infant’s School (a school for one infant) or even a Lady’s Day at Ascot (just one lady in a very big hat).  My old school, the King’s School, Grantham, was founded by Bishop Richard Foxe in 1528 and yet, every July, the school celebrates Founders’ Day.  I’ve never yet found out who the other founders were.

John, you did a good job raising the awareness of apostrophe abuse and I enjoyed my stay on your website.  Be assured some of us will continue to apply best practice to our use of apostrophes and, through example, try to persuade others to do the same. Take heart. The apostrophe is not yet dead! 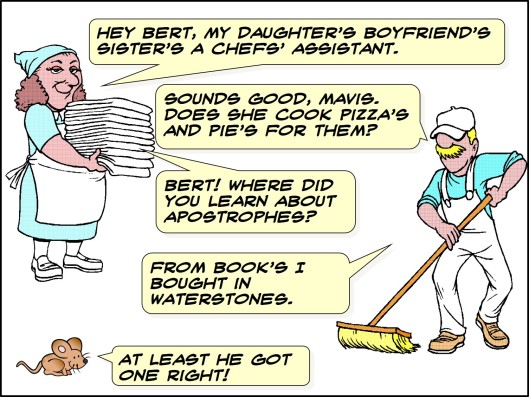