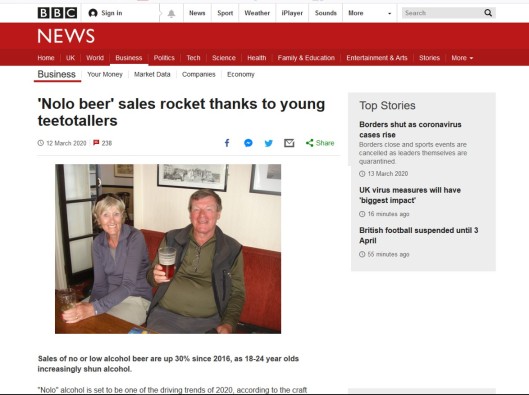 This was the headline of an article on yesterday’s BBC website. What caught my attention was the word nolo. Further down the article, all was revealed – no alcohol or low alcohol. Yep, made sense and caused me to think about other new or re-invigorated words I’ve spotted recently. Here’s what I’ve been making a note of:

I watch many movies and, as a result, read many reviews and I’ve noticed a tendency over the last few years for reviewers to refer to a character’s arc. Here are a couple of examples:

However, as captivating as Reilly’s portrayal of this sadist may be, a more gradual character arc highlighting the character’s descent into insanity… (Pophorror Reviewer of 2019 Abstruse movie)

The gut-punch of their arc then doesn’t come from supernatural shenanigans that…  (Roger Ebert’s reviewer of the 2020 remake of the classic horror movie, The Grudge)

It would seem as if arc is now being used to mean the growth of an actor’s character as the film progresses. Thinking about it, it’s fine but it caught me off guard when first I encountered the word in movie reviewers’ comments.

I’ve been using this mini-phrase for some time to mean that time in the evening when a cork is popped or a ring-pull pulled. It signifies the start of the winding-down period after a busy day and, yes, even retired people still have busy days. Different people have different beer or wine o’clock times but it’s an important activity-reducing milestone.

Way back in the ‘70s when Betamax and VHS video tape recording systems were introduced, we welcomed the luxury of time-displayed viewing, as it was then called: nowadays called catch-up. One result of this has been the phenomenon of binge viewing – a process whereby a person watches consecutive episodes of a series, stopping only for bio-breaks, sustenance, time to walk the dog, or sleep. My wife recently watched all eight 50-minute episodes of The Stranger over a 24-hour period and, a few years back, I got hooked on Breaking Bad and Mad Men, often binge-viewing four or five episodes before guilt caused me to hit the Pause button and go do something useful. Binge viewing sums up the phenomenon perfectly.

Currently trending, there is confusion about the meaning of these two words so let’s be clear. The words are not synonyms. Coronavirus, CoV, is the name given to any virus that comes from a group of Ribonucleic Acid, RNA, viruses. As Francis Crick, one of the discoverers of the double-helical nature of DNA, is alleged to have said, ‘DNA makes RNA ; RNA makes protein; and protein makes us.’  Examples of CoVs are SARS-CoV, MERS-CoV, and some of the common cold viruses. A new coronavirus is usually referred to as nCoV until it is allocated an official name. The nCoV that originated in Wuhan City in China has now been formerly named as SARS-CoV-2.

Covid-19 is the name given to the disease caused by SARS-CoV-2. In some reports, you will see Covid-19 used as the name of the coronavirus but this is incorrect. Just as any one of the coronaviruses 229E, NL63, OC43, and KHU1 can cause a common cold, so SARS-CoV-2 can cause Covid-19. Let’s hope you never encounter the virus nor contract the disease.

The recent outbreak of Covid-19 has prompted many to abandon traditional contact methods of greeting – the ubiquitous handshake, the French faire la bise cheek-to-cheek air kissing, the manly bro hug, the Maori nose-and-forehead tap, even the intimate light kiss on the lips favoured by some South Africans and those trying their luck. Nope, that’s all out the window now as we adopt contactless hail and farewells such as the Japanese bow, the Tibetan namaste (eyes down, hands together as if in prayer), or just a friendly nod. I noticed recently however that Prince ‘Call me Harry’ in one of his last official roles as a Royal used the elbow bump when he met the singer, Craig David, at the Commonwealth Day service earlier this month. Hmm; gotta be careful who you greet in this way. I would imagine you could come off worse if you elbow bump Tyson Fury or Dwayne Johnson!

The word hangry, meaning bad-tempered or irritable because you’re hungry (OED) has popped up in a couple of BBC articles I read and the word is a contracted form of hungry and angry but why would you be both at the same time? If you’re hungry, you’re hungry. If you’re angry, you’re angry? Why would you be hangry? It makes no sense but in the spirit of combining two emotions occurring simultaneously, I would like to introduce you to a few of my own invention: thirppy (thirsty and happy, the perfect antonym of hangry), joygust (joy and disgust), angersad (angry and sad), fejoyar (fear and joy), sympatrumph (sympathetic and triumphant) – and one more, sexstatic (sexy and ecstatic). Feel free to submit your own contracted multi-emotional neologisms.

I was intrigued by all the recent discussion about the effect of the new coronavirus, SARS-CoV-2. Would it start an epidemic or a pandemic? What’s the difference? The most common answers are somewhat vague. The Oxford Dictionary definitions are:

Epidemic: a large number of cases of a particular disease happening at the same time in a particular community.
Pandemic: a disease that spreads over a whole country or the whole world.

So, if we accept that a community is smaller than a whole country or the whole world, it’s just a question of scale.

But Merriam-Webster has slightly different definitions of these two words:

Epidemic: affecting or tending to affect a disproportionately large number of individuals within a population, community, or region at the same time.
Pandemic: occurring over a wide geographic area and affecting an exceptionally high proportion of the population.

What’s the difference between a disproportionately large number of individuals and an exceptionally high proportion of the population? Similarly, is a region different to a wide geographic area?

Looking at the roots of the two words, they stem from the Greek prefixes epi- meaning over or upon, and pan- meaning all, linked to demus meaning people. But there’s no indication as to when pan- would suit better than epi-.

On March 11, 2020, the World Health Organisation labelled the effect of SARS-CoV-19 a pandemic. When the contagion was limited to Wuhan City, it was labelled an epidemic but once it went international it became a pandemic. It would appear, therefore, that the difference is based on whether the contagion is national or international.

Recently, I was asked if ruth (the root of ruthless) was a word in its own right, not as a proper name but in some other way. Ruthless is formed from ruth plus the suffix -less so it’s possible that ruth has a root meaning. Here’s what the Online Etymology Dictionary, one of my favourite go-to websites, says about ruth:

In fact, you could say that ruth is the opposite of the German word, schadenfreude (pleasure derived from another person’s misfortune), for which no equivalent single English word exists unless we redefine ruthless to mean pleasure from the misery of another rather than without mercy or pity?