Or, put it another way, Google, Siri, Cortana and Alexa have become substitutes for memory loss. Why do I say this? As I approach my seventy-ninth birthday, so I suffer from the usual loss of memory associated with increasing age. I don’t think I have dementia, as such, (how can you tell?) but I know I forget things which in my earlier years would have been instant – who starred in such-and-such film, where did I put the car keys, is today Wednesday or Thursday, what did I come into the kitchen for, …?

I wake early every morning – around 5 AM usually – and get up to check emails, read the BBC news website, work on a book or blog; that sort of thing.  Around 7:30 AM, I go downstairs and make my wife a cup of tea to assist her passage from morning slumber to wide awakeness. As she sips of the hearty liquid which some say ‘lowers the risk of a heart attack by one third’ (one third of what?), I lie across the end of the bed and we discuss everything and anything. Often, during the discussion, we reach the point where we falter in our memory. This morning, for example, a discussion of Trump’s alleged lack of tax contributions to the United State’s federal government led to, ‘Who was the British Conservative politician who was married to Ffion?’ (Don’t ask how we got from Trump to this particular question; I can’t remember!)  I was half-way to my laptop to google the question when the cry went up – William Hague! – but had my wife not remembered, I knew that Google would know.

Last night during dinner, my wife, ex-daughter-in-law, granddaughter number 2, and I struggled to remember the name of a film starring Judi Dench and an English comedian, Steve Coogan (alter ego, Alan Partridge) in which Coogan played a straight role and the film was all about a mother’s search to find her forcibly-adopted son. Siri knew the answer – Philomena, she shouted at the dinner table.

Last week, we had dinner with some friends. During the course of the evening, I was offered and tried a red wine that turned out to be rather tasty albeit slightly too sweet for my palate. But, I noted the name and said I would try to get some to replenish my lockdown-ravaged stock at home.

The following morning, I struggled to remember the name of the wine. All I could recall was that it was red, somewhat merloty in flavour, was bought in a local supermarket, and had a homophonic name that sounded a bit like a chemist. Google found it – Apothik – available in Sainsbury’s. The name link was apothecary – one who makes and sells medicines.

I could have called my friend but that would have been cheating, don’t you think? Besides, she might not have remembered either!

These are three recent examples where Google, or a voice-enabled virtual assistant, has recently performed as an extension to my decaying memory cells. I asked my wife if she had any further examples. Her reply was, ‘I can’t remember any!’ despite the fact that we have memory lapses almost every day. I’m away to ask Google if he, she or it can remember any other examples!

Now, where did I leave my Windows 10 laptop? ‘Cortana, Cortana, wherefore art thou, Cortana?’ 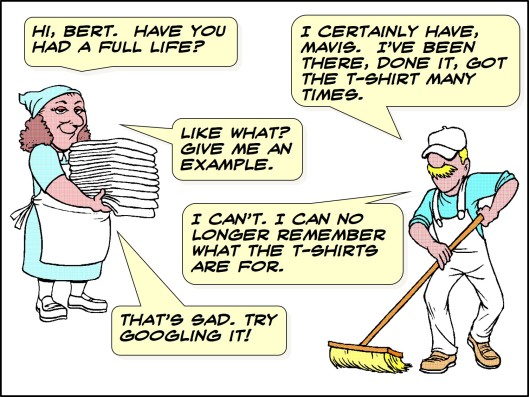 7 thoughts on “Beat dementia with Google, Siri, Cortana and Alexa…”