Three BBC news items caught my eye this morning. The first is to do with Donald Trump’s upcoming second impeachment trial which may, or may not, take place next month. 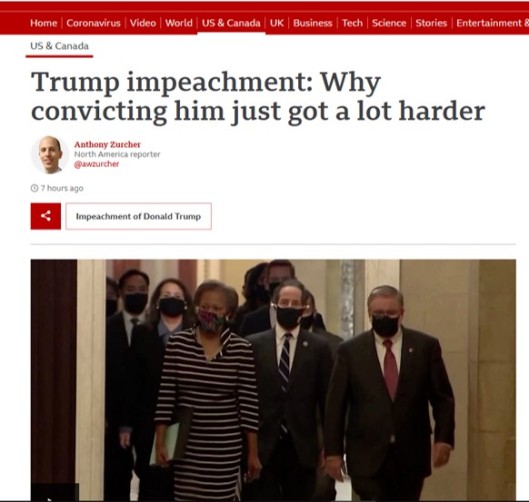 Yesterday I posted a lengthy blog about the upcoming second impeachment trial of ex-President Donald Trump. My comments were mostly to do with Trump’s lawyers’ ability to play with the definition of words and thus show that Trump did not incite the violence that resulted in the assault on the Capitol building on 6th January 2021. I needn’t have bothered!

At the end of my blog, I cast doubt on the legality of impeaching Trump now that he no longer holds an official position in the US government, and also pointed out the unlikelihood of seventeen Republicans voting with the fifty Democrats in the Senate to achieve the sixty-seven votes required to secure the impeachment.

Well, it ain’t gonna happen. Yesterday, forty-five of the fifty Republican senators voted to stop the impeachment trial on the grounds that you cannot impeach a private citizen. (The senators must all have read my blog. That’s nice!) This vote doesn’t stop the trial – fifty-five voted for it to proceed – but it says the final vote is highly unlikely to reach the required sixty-seven yes votes. At best, based on yesterday’s procedural vote, that figure will be fifty-five. In other words, proceeding with the trial benefits only the lawyers and is a major distraction for Joe Biden’s new government at a time when there are much bigger issues at stake – the Covid-19 pandemic, for example.

Which brings me to my second comment. Yesterday, the UK’s official death toll from Covid-19 passed the 100,000-milestone figure, becoming the fifth nation to do so after the US, Brazil, Mexico and India. The 100,162 figure features on today’s front pages of every major UK newspaper. I selected just one, The Daily Telegraph, as an example:

The newspapers and other social media are full of comments and opinions on this figure – why is the UK’s death toll so high compared with other countries, what went wrong, could we have done more, should heads roll, what about the future, and so on. I’ve no wish to contribute to these analyses but one figure intrigued me – the number of deaths per 1,000 heads of population in the five countries. Here are the latest figures taken from the worldometer website and ranked highest to lowest deaths per 1,000 people.

Note: the UK death rate ranks the highest among those countries that have registered over 100,000 deaths and that fact intrigues me. We are a law-abiding country meaning that most of us have heeded the rules set out by the government to prevent the spread of the SARS-CoV-2 virus. We have a national health service, free at the point of service and which has risen as best it can to the challenge of fighting the pandemic. We’ve had lockdowns, closures of schools and public meeting places (pubs, restaurants, gyms, barbers), social-distancing rules, bubble rules, wear-facemask rules, stay-at-home rules, all similar to other countries and yet we rank the highest; higher than Mexico and Brazil, both of which have been very cavalier in their response to the pandemic (and whose recorded figures may be grossly inaccurate thereby skewing the results).

I know the Covid-19 death rate is a function of many things – density of population, availability and efficacy of medical care, population age and ethnicity demographics, general health statistics including obesity levels, lack of test and trace system, accuracy of the statistics and standardisation of the measures used to record the figures, and more, and yet we still come top. For further comparison, here are the figures for three European countries with living standards and population figures similar to the UK.

Hmm. Similar but all lower than the UK, Germany considerably so. I’ll leave you to ponder on the reasons why we top the deaths-per-1,000 leader board of the five countries that have recorded 100,000 deaths. This analysis by the BBC might help.

The third item I wish to comment on is the open letter written by the Archbishops of Canterbury and York, Justin Welby and Stephen Cottrell. In the letter (full transcript here), the authors ask the nation to pause and reflect on many things as we pass the 100,000-death milestone. I took a look at this letter. Mostly the content is what you would expect archbishops to say but one suggestion stopped me in my reflective tracks:

One thing we can all do is pray. We hope it is some consolation to know that the church prays for the life of our nation every day. Whether you’re someone of faith, or not, we invite you to call on God in prayer. Starting on 1 February we invite you to set aside time every evening to pray, particularly at 6pm each day.

First, I am an atheist which means I qualify as someone of not faith and yet the archbishops are suggesting I join the daily 6 PM group prayer starting next month (why not today?). Why would I do this? Presumably, what the archbishops are saying is that even if you don’t believe in the existence of God, it’s still worth you praying because He does exist and He will hear your prayer and react accordingly. I’ve gotta think about that one!

And, the second point is, does group prayer work? Will the 6 PM evening ritual cause any change to the path of the pandemic? If yes, how will we know? The power, or otherwise, of group prayer is a ‘scientific and religious minefield’ and I won’t discuss further here. All I will say is that I’m surprised the archbishops thought it useful to publish their letter. Who is the target audience?  Do their words offer comfort to those who have lost loved ones? What about those who have an alternative faith system based on different god(s) – Hindus, Buddhists, Jains, Sikhs, Muslims, even Pastafarians (followers of the Flying Spaghetti Monster, he of the Noodly Appendage)? Should these religions start their own group prayer sessions? My theory is that because people have stayed away from churches during lockdown (although the government has allowed public worship if safe to do so), the archbishops have nothing to do and so decided to write the open letter. Perhaps they should volunteer as car park stewards at the all-night vaccination centres instead?