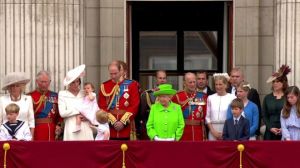 To honour the Queen’s official 90th birthday celebrations this weekend, here is another unpublished article I found in my archives.  It concerns the Scottish In-or-Out-of-the-UK Referendum held on Thursday September 18th, 2014.  The article was prompted by the newspaper headlines on Monday 15th September following a comment made by the Queen as she left the church she had attended the previous day.  The people named in the article are real people and did hold the offices attributed to them.  The dialogue, of course, is fiction.  Or is it?

An exercise in diplomacy, stupidity and futility

Osman: ’Morning chaps, and Kristina.  Sorry about calling a meeting on a Saturday but we’ve important stuff to discuss today: the Boss’s views on the Scottish referendum.’

Perkins: ‘Whoa, that’s a toughie Sal.  Her Maj isn’t supposed to have any opinions about such weighty matters.  In fact, does she have an opinion on this, or anything come to that?’

Osman: ‘Careful Eddie me boy.  That statement could be construed as treason.  We create and represent the Boss’s opinion on everything so that she can be “above politics”.  Let’s get serious.’

‘This wretched referendum on Scottish devolution has distracted the Great British Public from the more important news of yet another Royal baby on the way and the media, including that bloody awful rag, the Daily Mail, is clamouring for a statement from the Boss.  We have to come up with the words.  What’s it to be?’

Roscoe: ‘Hey, I like that Krissie gal.  Short, sharp and to the point.’

Osman:  ‘Seriously chaps, and Kristina.  We can’t have Queenie calling the Scots bastards.  Some of them aren’t!’

Perkins: ‘Ha ha; nice one Sal.  How about “My husband and I, being of Anglo-Saxon, Germanic and Greek origins hope that you, the Scots, being of Picts and Gaels origins bugger off and leave us alone?’

Osman, shouting over raucous laughter: ‘Come, come.  We must take this seriously.  Jimmy boy, what say you?’

Roscoe:  ‘You’re right Sal.  We need something that sounds as if it’s a serious opinionated statement but does not contravene the Boss’s constitutional impartiality.  It needs to be bland and loaded with ambiguity so that the Great British Public can read what they want to read into the statement.  Let me think…’

Kyriacou (interrupting): ‘I’ve got it.  How about “Power to the people!”?’

Perkins: ‘How about that brilliant phrase from her Maj’s Christmas speech last year—“We all need to get the balance right between action and reflection”?  That was a stupendous effervescent incandescent meaningless phrase, a prime example of how to sound intelligent without displaying any content.  Tailor-made for the lumpenproletariat.  Can we use it again Sal?’

Osman:  ‘Not yet Eddie.  We’ve earmarked that sentiment for reuse in the Christmas message in 2016 if the old bat is still alive.  If not, Charlie can say it whilst hugging a tree.’

‘Come on people.  We are paid mega-bucks from the public purse.  We must be able to come up with something equally trite but different.   And will someone kick that bloody corgi out of the room.  It’s just farted!’

The Queen says she hopes “people will think very carefully about the future” when questioned about the Scottish independence referendum?’

Osman: ‘Brilliant Jimmy boy, absolutely brilliant.  It says everything and nothing.  Let’s go with it.  I’ll go brief the Boss.  Kristina, think of an opportunity for the Boss to say these words—after church on Sunday might work.  Jimmy, get on to all the media boys and alert them that a BIG statement is coming.  Ed, make us a cup of tea, there’s a good boy.’

And with that, the meeting drew to a close and everyone departed to carry out their allotted tasks.

One day later, Sunday 14th September 2014, the Queen made a comment to a well-wisher, probably well-briefed to ask the question, outside the church she attended near her Balmoral estate in Aberdeenshire.  The question and reply were made within earshot of members of the British media.  When the well-wisher joked that they were not going to mention the referendum, the Queen remarked in cut-glass tones: ‘Well, I hope people will think very carefully about the future.’ 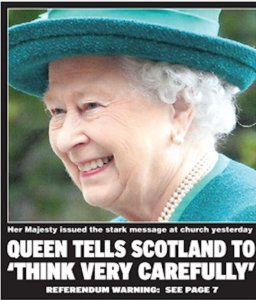 On Monday 15th September, 2014, her comment made front page headlines in the British press, three days ahead of the referendum date:

Only the Daily Mail and the Metro declined to report the Queen’s statement on their front pages.

Such is the way of the British Monarchy and its publicity machine.