The third and final US presidential candidate debate between Hillary Clinton and Donald Trump will take place next Wednesday, 19th October at the University of Nevada in Las Vegas.  Yesterday, while walking in a thunderstorm I was struck by a jagged cloud-to-ground bolt of lightning.  My whole body was momentarily encased in a ball of blue plasma.  I faintly heard the word “Zeus” through the one hearing aid not frazzled by the discharge.  The electrifying experience left me shaken, stirred and … clairvoyant.  I have seen the future.  I have seen the final presidential candidate debate through a time portal, now dissolved, and in the brief post-portal time left before all memories faded, I captured my observations in a report.  Ordinarily, I would wait until after the debate before posting my account but such is the importance of what happens I feel I should post it today, three days before the actual debate.  Here it is.  Please enjoy. 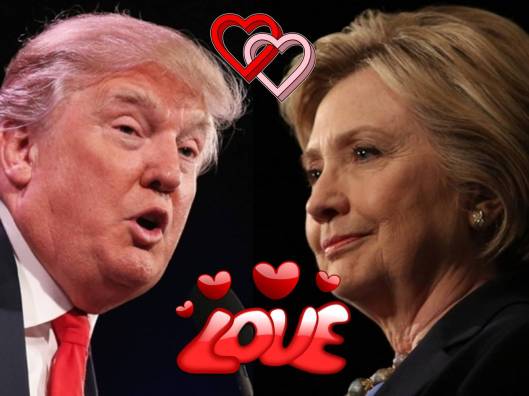 By the grace of Zeus, I have observed the third and final US presidential candidate debate between Donald Trump and Hillary Clinton, held at the University of Nevada, Las Vegas on Wednesday 19th October and, boy oh boy, was I pleasantly surprised.  Unlike the first two highly acrimonious debates held on the 26th September and 9th October, the final debate was a model of good manners, well-versed protagonists and civilised behaviour under the moderation of Chris Wallace, the much-respected political talk show anchor for Fox News.  There was no mud-slinging, no untimely interruptions, no evasive/divisive/disingenuous answers, no pepperpot politician responses, no sniffing even.  In its place were sound well-thought-out structured policy statements delivered eloquently and with respect for the adversary, the moderator and the audience.  Following the opening double-clasped warm handshake and chaste two mwah mwah kisses on Hillary Clinton’s cheeks, Donald Trump was particularly forthcoming and magnanimous on immigration recalling that the United States was founded by immigrants and welcoming all, especially followers of Islam. “You are all welcome to come here,” he said with open outstretched arms.  “Syrians, Libyans, North Koreans, hell, even Mexicans; welcome. Welcome to the land of the free, home of the brave.”  Hillary Clinton vigorously nodded her agreement with this sweeping all-embracing statement of open borders and friendship and signalled a warm smile of forgiveness and affection towards Trump.  I tell you—love was in the air, folks.

On the question of the role of the Supreme Court in the government of the USA, both Clinton and Trump agreed that the Supreme Court needed to be cut down to size and that its ability to veto legislation passed by both the House of Representatives and the Senate should be curtailed.  “It’s time to raise the twenty-eighth amendment,” said Clinton, referring to the US Constitution and its current twenty-seven amendments.  “Yes!” said Trump emphatically, punching the air.  This was another of the many points of amicable agreement between the two presidential candidates.

Both parties addressed the topic of the American economy.  Trump admitted that the US economy was in peril and hinted that if he became President he would reinvigorate the US market with new dollars by paying all the federal tax he had carefully avoided paying since 1998.  This would add considerable liquidity to his much discussed tax plan, already widely admired by those in Wall Street and Washington DC.  To counter Trump’s generous offer, Clinton said she would donate to the federal cause all the profits from the publication of her imminent book “How to Succeed in Politics even if Your Name is Clinton” which, she said, will reveal all about her recent e-mail indiscretions, her cuckquean relationship with husband Bill, the truth behind her involvement with the scandalous Whitewater Development Corporation, and what really went wrong in Benghazi.  Despite moderator Wallace’s admonishment, the audience stood, cheered and clapped at Clinton’s new-found probity.

Finally, both candidates were asked to state why they thought themselves fit to be President of the United States.  Both were succinct in their answers.

“Because I know how to create wealth; I am a patriotic American; and I love all women, especially those with big breasts,” said Trump looking sidewise towards his D-cup erstwhile-model wife Melania, an immigrant from former Yugoslavia.  He was rewarded with a resounding cry of “Yo bro, way to go” from all the rednecks in the audience.

“Because I am a woman who understands politics and knows how to get things done; a mother; a grandmother; and most of all a wife who can forgive the sexual peccadillos of a straying husband,” said Clinton to rapturous applause from the female members in the audience, and from a beaming Bill Clinton sitting close by, his arm wrapped around the shoulders of an attractive woman who resembled the actress and model Arianne Zucker.

With that, the debate came to an end and the participants retired, basking in the glory of a job well done and supremely confident that on the 8th November the American population will vote him or her into office.

And that, friends and followers, is how to write a fantasy blog for not one word of my commentary will come true!

1 thought on “Trump vs. Clinton: Redemption”