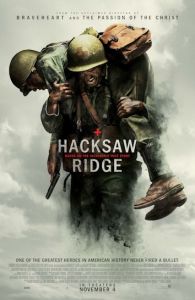 Pure Hollywood, pure Gibson, pure entertainment.  That’s how I would describe Mel Gibson’s 2016 film, Hacksaw Ridge, about the war in the Pacific in 1945.  After directing the savage pseudo-Mayan adventure movie Apocalypto in 2006, Gibson fell out of favour for voicing his opinions about the Jewish people when he was pulled over for drunken driving in California in July 2006.  It’s taken the powers that be in Hollywood ten years to forgive him but forgiven he is and Hacksaw Ridge is both his redemption and his atonement.  Set in 1945 at the back end of World War 2, the biographical film tells the story of Desmond Doss, a young Virginian, who although a conscientious objector, joined the US Marines as a combat medic intent on saving lives rather than taking them.  Doss is played convincingly by Andrew Garfield (Never Let Me Go, The Social Network, The Amazing Spider Man 1 and 2, …).  Doss’s actions during the 77th Infantry Division’s attack on Japanese military forces deployed on the 400 feet high Maeda Escarpment, nicknamed “Hacksaw Ridge”, on Okinawa in April 1945 resulted in him saving the lives of 75 wounded marines by repeatedly returning to the front line, applying emergency first aid treatment, and then carrying or dragging the soldiers back to safety by lowering them off the ridge with a makeshift rope sling.  For this, in October 1945, President Harry S Truman awarded Doss the American Medal of Honor, the first conscientious objector to be so honoured.

The film is in three chapters.  Chapter 1 establishes the back story and shows Doss as a young boy living with his brother and their devout Seventh-Day Adventist Christian parents.  An innocent scuffle between the two lads develops into something more dramatic and leads to Doss’s conviction that the fifth commandment is inviolable thus laying the foundation for his conscientious objection to war which later is in conflict with his desire to enlist and serve his country. The chapter continues with the now young-adult Doss’s old-fashioned and very sweet romancing of a local nurse Dorothy Schutte, played by Teresa Palmer, better known for her role in horror movies (Wolf Creek, The Grudge 2, Warm Bodies, …), and concludes with his decision to join the US Marines.

Chapter 2 portrays Doss’s life at the Fort Jackson boot camp and illustrates the problems that arise when it becomes clear both to his fellow marines and superior officers that he is firm in his conviction never to be trained to kill, never to pick up a rifle even.  I enjoyed this chapter.  It lays bare the beliefs of conscientious objectors causing pause for thought and, unlike many boot camp movies, is not punctuated by sadistic behaviour by the hut sergeant, Sgt Howell (a finely-balanced performance by Vince Vaughn).   I suspect that Gibson’s portrayal of life at boot camp is far closer to the truth than that shown in other such movies.

The third and final chapter depicts what happens when Doss’s 77th Infantry Division is deployed to Okinawa where they are called upon to attack and defeat the Japanese soldiers entrenched on the escarpment and it is here that Gibson’s direction excels.  If you thought that the first 20 minutes of Spielberg’s Saving Private Ryan were the most realistic war scenes you have ever witnessed in a movie, think again.  The battle for Hacksaw Ridge is amazing film making.  I have watched a lot of war movies and over-the-top gorefest horror movies but the last 75 minutes of Hacksaw Ridge is undeniably the closest you will ever come to experiencing a real World War 2 battlefield.  It’s just incredible film making.

I’ve not read any of the reviews for this movie.  I’ll do so when I’ve posted my own thoughts but I suspect the critics will draw comparisons between Hacksaw Ridge and other acclaimed war movies such as Saving Private Ryan and possibly Apocalypse Now, Platoon, Enemy at the Gates, Fortress of War, and so on.  The film also invites discussion about the morality of war and the conflicts that arise if you are a conscientious objector, for whatever reasons, and yet want to be of service to your country in time of war.

One final comment.  There is a major flaw in the film.  If you’ve not seen the film yet and don’t want to know, look away now.  Otherwise continue…

In the battle scenes, the marines are shown using a rope-ladder net to scale the ridge from their beachhead.  It is mentioned that three times the marines have clambered up the net and attacked the Japanese on top only to be repulsed causing a retreat back down the net to the beach below.  When Doss carries out his heroic rescue of the injured marines on the escarpment, he fashions a rope sling to lower each injured soldier back down to the beach.  He controls the descent by wrapping the rope around a post that anchors the net at the top of the ridge.  At the end of the lowering-down-the-cliff scene, Doss, now wounded, lowers himself down to the outstretched arms of his comrades.

At this point, Japanese soldiers appear at the top of the ridge and start shooting at the Americans below.  The Americans fire back and the Japanese soldiers retreat from the edge.  This scene begs the question—if the Americans had been repulsed three times already and if on each occasion the Japanese could approach to the very edge of the ridge, why didn’t they cut the ropes that secured the top end of the rope-ladder net thus preventing any further ascents?

I guess sometimes Hollywood has to sacrifice common-sense for dramatic effect.