I’ve tried to stay out of commenting on the recent shenanigans of Harry Mountbatten-Windsor and Meghan Markle, henceforth referred to as H&M. I consider the unfolding events in Iran accompanied by an unprecedented admission of guilt in shooting down the Ukranian aircraft; or the destruction caused by the rampant destructive wildfires in Australia; or the Trump-impeachment power plays in American politics; or what happens after Brexit on January 31st next; or whether my wife will remember to buy me a Craster kipper for lunch when she next goes shopping in Waitrose; or… all of these topics, and more, to be far more important than the ‘everyday story of the simple folk known as the Royal Family’. But, alas, I have succumbed to temptation. Today’s BBC ‘The Papers’ shows the front pages of ten of the UK’s national newspapers and how the headline writers summarised the result of yesterday’s emergency meeting at Sandringham, the Queen’s estate in Norfolk. Here are the headlines:

Apart from the basic question of could the Queen have done anything else other than agree to let H&M go, there are some interesting headline styles here. When you dig deeper, however, and look at what the opinion writers and royal correspondents are saying, there is an underlying assumption that we, the Great British Public, care about the future of the Royal Family; about whether H&M will be able to make a go of it as non-Royals or part-Royals; about the lack, or otherwise, of brotherly love between William and Harry or sisterly love between Catherine and Meghan; or about the feelings of the Queen (who is never allowed to express an opinion on anything, not even whether Craster kippers are better than Manx kippers – they are). For example, take a look at what the ultimate sycophant and desperate knighthood seeker, Piers Morgan, said when H&M first dropped their ‘Stop the Royal Family, I Want to Get Off’ bombshell last week. In an article defending his criticism of Meghan Markle, Morgan wrote the following; my italics:

‘How dare these two self-absorbed whining freeloaders treat the Queen like this? Who the hell do they think they are? Shameless and shameful.’

And how about this:

But what genuinely worries me now is that the very future of the Monarchy may be in serious jeopardy if these two renegades have their way and become effectively a pair of rival royals bestriding the globe acting like they’re the big dogs, doing what the hell they like and using their royal fame to line their own pockets to the tune of millions like a pair of greedy, grasping hustlers, destroying the royal brand one grubby deal at a time.

It can’t be allowed to happen. Nobody tells the Queen what to do. She’s the most powerful, respected person in Britain. And right now, she’s facing a direct threat to everything she has worked so hard to maintain.’

Jeez, the assumptions here are astronomical! Morgan assumes that we all have an undying fealty to the Queen and what she represents and that we hold her in such high esteem that anything that threatens her existence as the head of the Royal Family is… well, it just doesn’t bear thinking off.

I conducted a one-interviewee straw poll. I asked my oldest granddaughter Ella, a 20-year-old second-year student at Cardiff University, whether the H&M saga was ever discussed among her circle of friends at the university. Her reply was no. She indicated there was zero interest in anything to do with the Royal Family. Is she typical of her generation? I sincerely hope so.

(Added note. A second one-interviewee poll conducted with 18-year-old sixth-form-college student, Georgia (Ella’s sister, my second oldest granddaughter), produced exactly the same answer. ‘I didn’t even know they (M&K) were leaving the country,’ she said. Apparently, nobody in her social circle at school, or her classmates, ever mentions anything about the Royal Family, she added. There is hope.)

Okay, enough said. I promised myself I would not get drawn into the breathtaking/distressing/ludicrous/risible/laughable/life-threatening/nonconsequential (select which adjective applies, or use your own) withdrawal of H&M from public life but, like all New Year resolutions, I broke the promise. I just hope the news media will now refocus their attention and opinions on things that matter. H&M hope the same, I believe. As will all Canadians just as soon as the H&M media firestorm hits their newscasts and social media platforms. 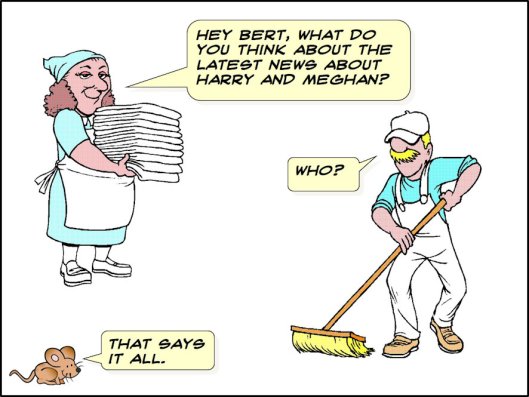