Or should my heading read ‘Brexit 50p Coin, Philip Pullman and the Oxford Comma’? (No comma after ‘Pullman’)

Yesterday, the UK formally exited the European Union. Brexit has delivered, and to commemorate this major event in our history, the Royal Mint has issued a special version of the 50p coin. Inscribed on the back of this coin are the immortal words ‘Peace, prosperity and friendship with all nations 31 January, 2020’ and the English novelist, Sir Philip Pullman, is up in arms, calling for a ‘boycott (of the coin) by all literate people’. Quite how you can boycott a coin jangling loosely in your pocket or purse escapes me but, more to the point, why is our knightly novelist calling for such action?  The answer, quite simply, is that he is objecting to the absence of a comma after the word ‘prosperity’ – the omission of the notorious Oxford comma, also known as the serial/series comma or Harvard comma.

Why all the fuss? Grammarians have long argued over the need to include or omit the comma before the last item in a list of items. I entered the fray in 2014 when I wrote an article titled The death of the comma?, now available in my 2014 book Fingers to the Keyboard: 2000 – 2014. Here’s what I wrote:

In his Slate article, McWhorter mentioned the Oxford comma.   Textbook grammar states that there should be no comma between the penultimate and ultimate items in a list – eggs, bacon, mushrooms and tomatoes – whereas Oxford comma supporters insert the extra comma – eggs, bacon, mushrooms, and tomatoes.   I’ve no axe to grind either way.   Sometimes I put it in; sometimes not.  Inserting the extra comma depends on whether it contributes to clarity or emphasis, or not – ‘she feasted on quails’ eggs, caviar, and champagne’ reads better than ‘she feasted on quails’ eggs, caviar and champagne’ in my opinion.  The presence of the comma before the and adds weight to the and and emphasises that champagne was also included as a crowning glory to the feast.  But, by the same token, I would write ‘he bought pens, ink, staples and paper’ if there was no need to emphasise one item over another.

You pays your money and takes your choice with the Oxford comma.

Later, in my 2018 book, The Mechanics of Creative Writing, I created a cartoon to demonstrate when the insertion of an Oxford comma is essential to remove ambiguity. Here’s the cartoon and accompanying text: 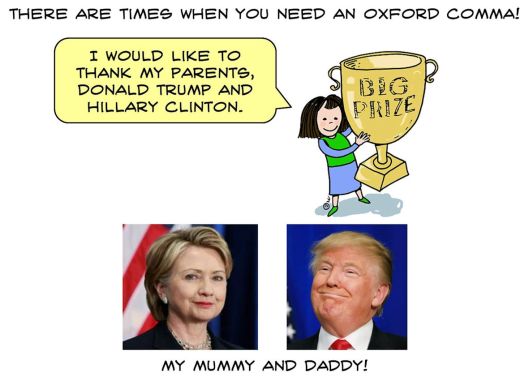 Oxford commas rule, okay?  See the illuminating example above.  I suspect that the Big Prize winner meant to say, “I would like to thank my parents, Donald Trump, and Hillary Clinton.”  All three parties would be happy with that.

Quite why Philip Pullman is up in arms defeats me. Any author has to make a decision about whether to include or omit the comma and if clarity, emphasis or ambiguity issues raise their head, there’s really no reason not to include it. As I’ve said before, there are no rules about these things. There are opinions, style guides and accepted common practice (conventions) but no rules. Rules require an authoritative legislative body and there is no such body in command of the grammar of the English language and I, for one, have no intention of rejecting a Brexit 50p coin if offered to me in change following a cash transaction. Quite the opposite. Brexit 50p coins are destined to become collector items so grab ‘em while you can.

My advice to Philip Pullman is calm down, collect the coins and put them in a biscuit tin for safe keeping! And why did neither he, nor anyone else as far as I know, comment on the lack of a full stop at the end of the text?