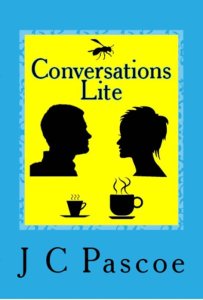 Well now, here’s a thing.  You may recall that a few days back I reviewed a new book, Conversations, by J C Pascoe, an author I’d never heard of.  You’ll find the review here.

The novel concentrates on a variety of conversations between the two main protagonists: Abi, a social sciences student in her third and last year at university, and Gerry, a middle-aged divorcé and retired actuary whose hobby is beekeeping.  Abi and Gerry cover a lot of topics but the book is more than just a series of discussions.  It also contains a lot of sex in the form of what Pascoe calls shadow flashback chapters and at the end when Gerry decides to “stop the jabber; time to grab ‘er!”—well, not quite; it’s Abi who takes the lead and the back-end of the book is very detailed in what takes place physically between our two main players.

Okay, this is all well and good but Conversations is clearly in the adults-only category so you can imagine my surprise when I was alerted to an alternative expurgated version.  Called Conversations Lite, this version contains everything that’s in the original book except the sexually explicit content.  Gone are the shadow flashback chapters detailing Abi’s and Gerry’s separate sexual progression through puberty to adulthood.  Gone are the last two chapters detailing what happened when Abi stayed at Gerry’s place for their last conversation which turned out to be more physical and less vocal.  In fact, according to the author, one third of the original book has gone.  All that’s left is the series of conversations and just the first two of their eventual couplings—a joint shower after tending to the bees and a conventional romantic evening meal followed by an intense lovemaking scene—and then, as the text says, a veil is drawn over what happens over the weekend.  The last two chapters are axed.

Having read the original book, Conversations, I am intrigued as to whether Conversations Lite will stand alone as an enjoyable read.  There is no doubt that the sex content in Conversations brings an added dimension to the book but the series of discussions are themselves quite thought provoking and, of course, the development of the relationship over the course of twenty chapters is also still present adding a touch of excitement and anticipation.

At the end of Conversations Lite, there is an interview with the author.  In it, he (I’ll assume male) justifies the publication of the lite version.  He says, “I received feedback that some potential readers were put off reading the book because of the sexual content.  This was a pity and I decided to remove the sexual content and see if the book would stand on its own based on the conversations.”

I was also intrigued by his use of the word lite in the title. Pascoe touches on this as well, saying “In marketing speak, if a product is lite it implies that something that is bad for you has been reduced or removed—reduced alcohol, fat, sugar, or salt and in the case of Conversations Lite, reduced sex.”  Is sex bad for you?  I’ll leave you to ponder the answer to this question. 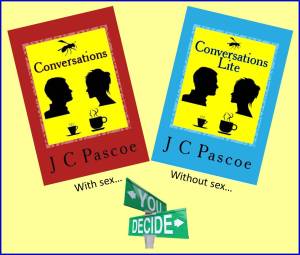